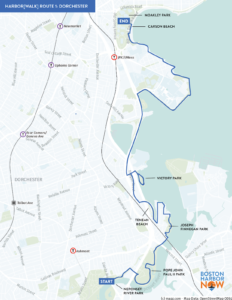 What does it mean to celebrate the 35th anniversary of a plan? For Boston Harbor Now, it means studying what has been accomplished since the Boston Redevelopment Authority (now the Boston Planning and Development Agency) released a HarborPark plan in 1984. Designed to create public parks and pathways along the waterfront just as the famously dirty harbor was on the cusp of being cleaned, it took tremendous vision to conceive of what exists today, especially when the first disconnected pieces were being built.

To appreciate all that’s been accomplished, it helps to walk the shoreline of Boston’s Harbor and see what has changed, what remains incomplete, and what needs to be protected with rising sea levels. For four consecutive Saturdays, we’ll be exploring the coast one section at a time. On October 5th, we walked 7 miles along the Dorchester Harborwalk from the tidal estuary at the mouth of the Neponset to the sands of Carson Beach. 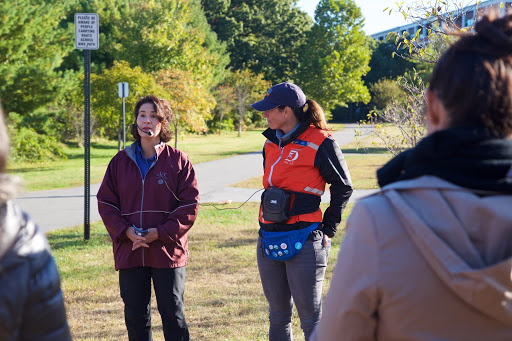 Joined by approximately 40 people and one dog, we began at Neponset Park, one of several parks along the walk owned by the Massachusetts Department of Conservation and Recreation (DCR) and a piece of the Neponset River Greenway. Deputy DCR Commissioner Priscilla Geigis welcomed the walkers, talked about the five state parks we’d be visiting, and noted that the Neponset River Greenway, where we began the walk, was just named a 2019 Great Public Space by the American Planning Association.

Thirty-five years might seem like a strange inflection point for an anniversary, but when we heard from Port Norfolk residents John and Maria Lyons about Joseph Finnegan Park, it was clear that we’d arrived at the right time. In 1984, the site was home to Shaffer Paper and was also being used as a hazardous waste disposal site. Though the property was acquired by the state in 1986, it didn’t open as a park until May of 2017.

Where Pope John Paul II Park sits today, there was a drive-in movie theater and a dump in the 1980’s. We walked the waterfront paths in the park and admired the dramatic transformation of this 66-acre park. This year, the park is getting a new playground. And on October 22nd, you can join the community in celebrating the harbor and the park with the annual Neponset Pumpkin Float. 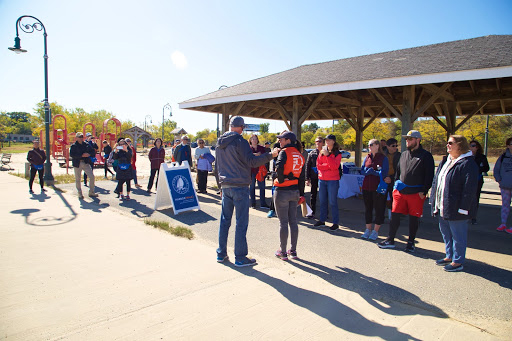 Tenean Beach also has a new playground under construction, but the park remains vulnerable to sea level rise, readily apparent during the highest tides today, and combined sewage overflows prevent the beach from consistently maintaining an A rating. The section of waterfront from here north to Morrissey Boulevard is where the most work has yet to be done. Proposals to connect Tenean Beach to Victory Road park as well as creating a path between the National Grid gas tanks and I-93 are still in early design phases. With the recent launch of Climate Ready Dorchester, a more detailed proposal for building resilient parks and paths here may be forthcoming. 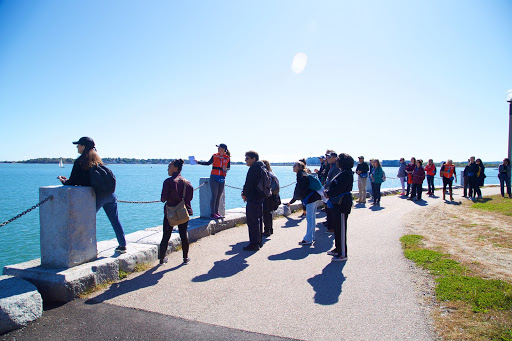 Columbia Point provides an uninterrupted path along the water that stretches more than two miles thanks to the most recently completed section, the “calf pasture” path. It’s home to UMass Boston’s Fox Point Dock with research vessels and sail boats as well as Fallon Pier, which is being redesigned to be part of a future ferry route. Walking around the point offers ever-changing views of the surrounding Harbor, Islands, and city skyline along with a chance to see President Kennedy’s 25-foot sloop, the Vicutra. 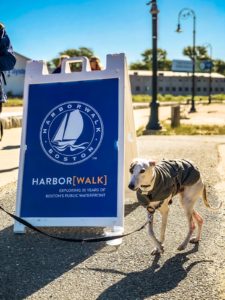 The walk ended at Carson Beach with sandwiches from Lamberts and information about the Moakley Park plan. Join us for one (or all!) of the next three walks in this series, as we trace the waterfront around South Boston (October 12); Fort Point, the Wharf District, and the North End (October 19); and Charlestown and East Boston (October 26).