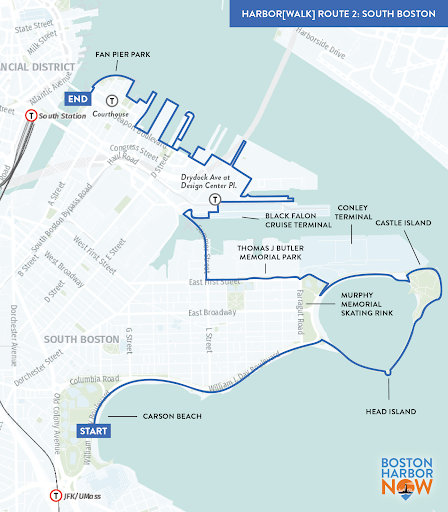 We were expecting to see two huge cruise ships docked along the Reserved Channel at Flynn Cruiseport Boston, but strong winds had delayed them out at sea and made the day colder as Boston Harbor Now embarked on the second Harbor[walk] in the series. On October 12th, those two ships were among the 140 that will visit South Boston’s cruise terminal in 2019. The cruiseport welcomed 389,619 passengers in 2018 and expects even more this year, but in 1984, the bustling facility was still only an idea—it didn’t open until 1986.

As we celebrate the 35th anniversary of the then-BRA’s HarborPark plan, we keep stumbling across the tremendous potential that had yet to be realized and the progress since that era that we now take for granted. Although Fort Independence at Castle Island dates back to the 1830’s and some of the yacht clubs along Day Boulevard date from the 1860’s, much of the 9-mile walk highlighted the dramatic change that has taken place over the last three and a half decades, with some connections completed in the past two months. 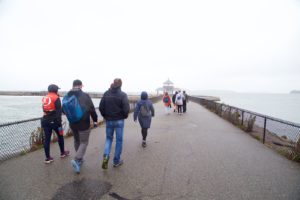 The walk, which explored the existing Harborwalk from Carson Beach to the Envoy Hotel, began along the pedestrian-friendly beaches of South Boston, continued out around Pleasure Bay to Head Island, and then circled Fort Independence and the obelisk that honors shipbuilder Donald McKay. For the locals on the walk, this stretch was familiar. Though the waters and beaches are significantly cleaner now than they were in 1984, the physical landscape has changed very little. 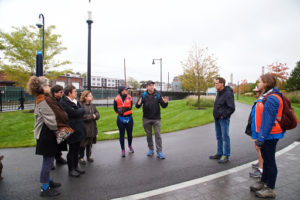 Beginning at the intersection of 1st Street, Farragut, and Shore Road, the situation changed significantly. Here, at the former entrance to Conley Terminal, there’s a relatively new path and a different interaction with the neighborhood. Andrew Hargens, the Chief Development Officer at Massport, joined the walk and shared the dramatic changes to this major shipping facility. Though the port dominates the waterfront here, the truck traffic no longer disrupts the neighborhood. The trucks now enter and exit off of Summer Street on the Butler Freight Corridor and local residents can now enjoy quieter streets and a walk along the curving path of Butler Memorial Park. 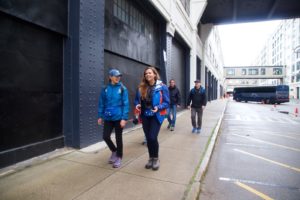 Where there are water-dependent uses along the waterfront, like container shipping, lobster boat docking, cruise ship berthing, and ship repair, there is little public access. We walked around the Reserved Channel mostly on streets and sidewalks instead of Harborwalk. Dry Dock Avenue was lined with tour buses awaiting the cruise ship passengers who were due to arrive any minute. But even in this bustling working port area, there were spurs of Harborwalk designed to provide vistas of the Harbor and the maritime industry. These included one section called “Drydock Green Space” and “Dry Dock Plaza Park” on Tide Street where a set of spiral stairs and a long ramp leading up to a platform for watching ships being worked on in the active dry dock.

As the group reached the northern end of Seafood Way, East Boston came into view for the first time and we spotted a cruise ship entering the harbor. Beginning at this waterfront spot next to Legal Seafoods’ fish processing facility, evidence of the Seaport’s dramatic change was fully apparent. Not only were the tall glassy buildings new, but the demand for seafood processing in Boston was also apparent. The Fish Pier, originally built in 1910 and now owned by Massport, is fully leased. With proximity to Logan Airport and expertly trained staff, the fish processing industry in Boston is among the four largest in the country alongside Seattle, Miami, and Los Angeles. Sometime next year, shipping containers will be installed here along Seaport Boulevard to sell incredibly fresh fish directly to the public.

West of B Street, we turned onto some of the city’s newest Harborwalk sections and continued along the waterfront for the duration of the walk. The boardwalk around Pier 4 opened in August and includes sea steps designed to be partially covered at high tide. The ICA’s boardwalk is now finally connected to the waterfront at both ends. We passed the lookout steps, waterfall, and firepit on Fan Pier before ending the long cold walk at the Envoy Hotel with bowls of clam chowder.

Join us for the last walk in this special anniversary series, tracing the harbor along Charlestown and East Boston on October 26. Sign up at bostonharbornow.org/Harborwalk35.

Missed our last Harborwalk blog post? Check it out here.