Many thanks to all who attended Boston Harbor Now’s Annual Onboard Awards & Networking Celebration November 27, 2018! The evening was a celebration of the contributions of three Boston Harbor Now partners improving public spaces on Boston Harbor: The Fallon Company, TJ McCartney and the Painters and Allied Trades DC #35, and the Massachusetts Port Authority. 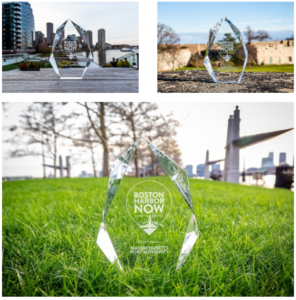 For The Fallon Company, Boston is home and through its signature development, Fan Pier, the real estate development leader has created a Seaport neighborhood that has evolved from underutilized, empty parking lots to a vibrant mixed-use community in which to work, live, and play. Since 2003, The Fallon Company has made a multi-million dollar investments in activating the Harbor. When the Seaport was still taking shape, Fallon was already a leader in hosting international events and experiences that drew thousands of people to the Harbor and infused life into the waterfront. Boston Harbor Now is pleased to recognize The Fallon Company this year for its latest revitalization efforts with the culmination of its work on the Harborwalk, from Courthouse Way to Fan Pier’s Marina Park Drive, one of the widest sections of Harborwalk on private property. Over the past several years, The Fallon Company has significantly enhanced and activated this section of the Seaport Harborwalk with the introduction of the abutting Fan Pier Park, which includes a tidal pool, recreational areas including a fire pit, a tot lot, and most recently the Lookout Pavilion. This new infrastructure attracts people to the waterfront and invites them to stay. As a longtime pioneer in the Seaport District, The Fallon Company’s efforts along the Harborwalk have provided a model for activating the public realm.

TJ McCartney and The International Union of Painters and Allied Trades DC # 35: With close to 40 years of experience in the drywall industry T. J. McCartney has built a reputation for quality workmanship and exceptional performance. Together, T.J. McCartney and The Finishing Trades New England, the training provider for IUPAT DC # 35, have embarked on several multi-year, pro-bono projects helping build, renovate, and revive the Boston Harbor Islands. Their efforts include the full renovation and rehabilitation of the chapel on Peddocks Island and additional infrastructure improvements to visitor safety and amenities on Georges and Spectacle Islands. Their commitment to the Boston Harbor Islands National and State Park has been a catalyst for expanded programming and broadening the capital planning for future investments.

Massachusetts Port Authority has a long history with Boston’s port facilities from Conley Terminal in South Boston to the Autoport in Charlestown with an unwavering commitment to connecting Massachusetts and New England to the world, safely, securely and efficiently. In this role, they have advanced Massachusetts’ working maritime tradition by working with the industry and supporting thousands of good-paying jobs in the Port of Boston. As waterfront property owners, they have also made significant contributions to the development of the Harborwalk and waterfront parks and greenway connections in East Boston and South Boston including Piers Park, the East Boston Greenway, and the Thomas J Butler Memorial Park. This year we are pleased to honor Massport for their work to preserve and expand port activities while also improving the public realm of the surrounding neighborhoods.