Beacon, a 20’ tall bamboo sculpture by The Myth Makers, Donna Dodson & Andy Moerlein was a monumental bamboo sculpture inspired by the Osprey as a tribute to Rachel Carson and her ecological restoration efforts in Boston and beyond. The Myth Makers public artwork initiated the first project of the new Harborwalk Artist in Residence (AIR) program. The Myth Makers highlight the Osprey as a survivor and adapter in our rapidly evolving human landscape. Devastated by DDT poisoning, these skilled fish hawks are recovering from the brink of extinction, and are an inspiring example of the role humans can play in restoring balance when we engage the living world around us. The Harborwalk is a great vantage point to study these rugged birds in the Boston Harbor. The sculpture was installed at Head Island, also known as the Sugar Bowl, at the far end of the loop around Pleasure Bay. The artists led a processional celebration to install the sculpture where they discussed the legacy of Rachel Carson and citizen scientists worldwide who have contributed to science through personal observations and documentation. The sculpture was on view at this location until Friday Sept 7th, and then it migrated to the Charlestown Navy Yard where it was on view until Friday November 16th.

In the Harbor, Freedom Sings

In the Harbor, Freedom Sings was created by Artist Kera M. Washington who metaphorically traced the footprints of African and Native (Indigenous) Americans who walked on and in the Boston Harbor Islands. Washington composed songs and rhythms inspired by music that was written by early activists and abolitionists during and/or about pre-Emancipation Boston-based struggles for freedom. Through percussion workshops and public performances on George’s Island, Washington explored the messages in this music that are relevant today, and shared this (new) music and creation with visitors of the islands. This music and its messages of inspiration spoke to the continuing struggles for liberty that African and Native (Indigenous) Americans still experience today.

In Shore Line Recall, the public was invited to join artist Freedom Baird in recording their experiences of the Boston Harbor Islands’ lowest-lying areas which are in danger of vanishing with rise in sea-level caused by climate change. For each day of the residency, Baird visited the most vulnerable areas of each island and set up The Human Nature Field Desk, a portable, weather-resistant desk where participants created 2-D visual art and text to capture their impressions. These records were bound into an archival volume which serves as a document of future places long-gone. The public participated in the project and contributed to the art created during each day of her residency: Sun Aug 19 (12:30-4:30pm): George's Island Tues Aug 21 (noon-3pm): Peddocks Island Weds Aug 22 (11am-3pm): Lovells Island Thurs Aug 23 (10am-2pm): Spectacle Island Fri Aug 24 (9:30am-12:30pm): Bumpkin Island, (1:30-5:30): Grape Island Visit http://freedombaird.org/human-nature/shore-line-recall/ for more info. 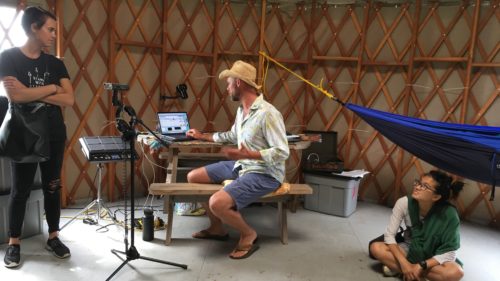 Ryan Edwards is a Boston-based composer and interdisciplinary artist, as well as the co-founder and drummer of Afro-Beat band Federator N°1 with a background in West African drum and dance, jazz and new-music composition. He is a New Music America Grant Recipient, and travels the world to make people dance to his multi-genre music and art. In his residency, Ryan captured sounds of the island and made new sample / triggered / electronic instruments. With these new instruments, he wrote, performed and recorded a suite of songs for the island, on the island, and in a way, by the island. Read more about the works of Ryan Edwards: http://www.ryanedwards.info

Field Recordings made 8/2/17- 8/10/17 by Edwards on Spectacle Island were recorded with an H4n Zoom mobile recording device. All files are raw and unedited. Edwards “created tracks” with all sounds sourced, created, written and mixed on Spectacle Island, in the yurt.
Daniel Zeese is an artist, designer and educator practicing in Boston. His latest work explores populations, belonging and identity within urban environments. He received a Bachelor’s of Fine Arts, Sculpture, from Virginia Commonwealth University in 2010 and a Masters in Architecture from Boston Architectural College in 2015. In his residency, Daniel Zeese investigated what it means to be on the edge of civilization and the wilderness. Zeese produced a series of narrative vignettes and imaginary landscapes using collages of scanned images collected from the island as well as wearable sculptures. The body of work Daniel created in this residency is called “Toile” and can be best seen on his website: danielzeese.com/new-index/

Peddock’s Island is a platform for artists to investigate, expand, and challenge the creative potential of landscape management through sculptural installation made primarily of invasive plant species harvested on the island. 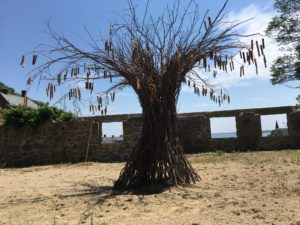 Josh Falk is a Boston based mixed-media artist. Born and raised in North-Central, MA he spent most of his time exploring the outdoors, skateboarding and painting graffiti. Falk began to use photography as a means to document his various urban explorations and it soon became his main creative focus. More recently his work has evolved to include collages, painting, and site-specific sculpture work. A Tree wind chime using Norway Maple saplings are layered to create a dense, bark-like look. Leaf-like sections of Japanese knotweed create a hollow acoustic sound. The Tree is the centerpiece of an interactive Zen garden for visitors to Peddocks Island to explore.

Gary Orlinsky is a public artist whose site-specific installations have been shown in museums, parks and gardens throughout the United States. He currently teaches at Assumption College and in the Commonwealth College Honors Program at the University of Massachusetts, Amherst. Porta is a tall, graceful towering gateway using stacked logs, an open grid work, and a double cantilevered roof spanning the structure. Views of land, sea, forest and sky are framed by the structure, and these landscapes become part of the piece.

Kerri Schmidt is a Boston-based multimedia artist and educator. She seeks to create points of entry into her art that engage and invite interaction and develop new ways of seeing and knowing. Her nature-based experiences and a profound pleasure for small moments encountered during daily life are deeply rooted in her artwork and reflect the conversations she creates with the world. “Two-Family Cottage” is be a human scale duplex bird's nest made out of oriental bittersweet vines, maple saplings, and soft nesting materials (grass, yarn, fiber, flowers, string).

Gianna Stewart is Boston-based artist with a passion for public art. She received her MFA from the School of the Museum of Fine Arts, Boston/ Tufts University. She developed her signature technique for casting resins with Midden, a dozen oysters of mythical proportions installed on the Greenway. Invasive Maple trees distribute their seeds via a winged nut known as a samara. These small specimens float through the air, spinning to the ground. Samaras consists of oversized samaras suspended in midair, cast in transparent plastic that catch the sunlight as they gently spin overhead Battery Whitman.

Kristen Wyman is a member of the Natick Nipmuc tribe of Massachusetts and a longtime advocate for access to public lands, environmental justice and rights to self-determination for tribal peoples of New England. Over the past decade, Kristen has focused much of her work on youth development and women’s programming. She held positions with the National Park Service, US Geological Survey, Woods Hole Oceanographic Institute, and the Mashpee Wampanoag Tribe Education and Natural Resource Departments and developed curriculum material compatible with tribal epistemologies and statewide learning standards in STEM. As the Community Programs Coordinator with Gedakina, Kristen collaborates with tribal youth and families to increase access to indigenous knowledge, restore traditional lifeways, and strengthen indigenous economies. Nia Holley is a recent graduate from the School of the Museum of Fine Arts, Boston and Tufts University. Her interests include the integration of traditional Nipmuc art forms with modern materials and usage and the rooting out of the politics that prevent communities from thriving. Most recently, she has been focusing on creating various objects and their relationship to the body as her work is largely based off of the various experiences Black and Native bodies undergo. The objects she creates are reflections of said experiences. Since 2012, she has been working under the concept of survival, ranging specifically from cultural survival and now to other various and sometimes discreet forms of survival adopted generationally. Members of the Nipmuc, Massachuset, and Wampanoag tribes collaborated to create a Fish Weir, as a way to introduce park visitors to the very unique relationship of Eastern Woodland peoples to the coastal environments of Massachusetts Bay. 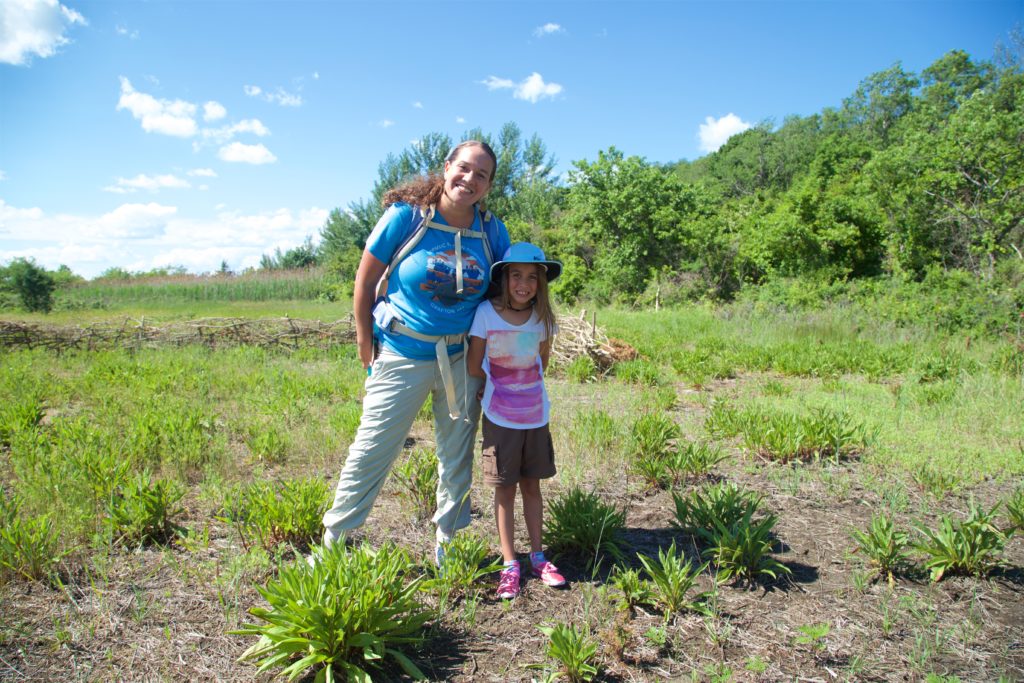 With many of our communities located within a short distance from Boston Harbor, Boston Harbor Now, through funding from The Boston Foundation, the Boston Cultural Council, Reynders McVeigh Capital Management and Fresh Pond Capital wishes to introduce (or re-introduce) communities to the enjoyment of Boston Harbor so we can all take advantage of this great resource.