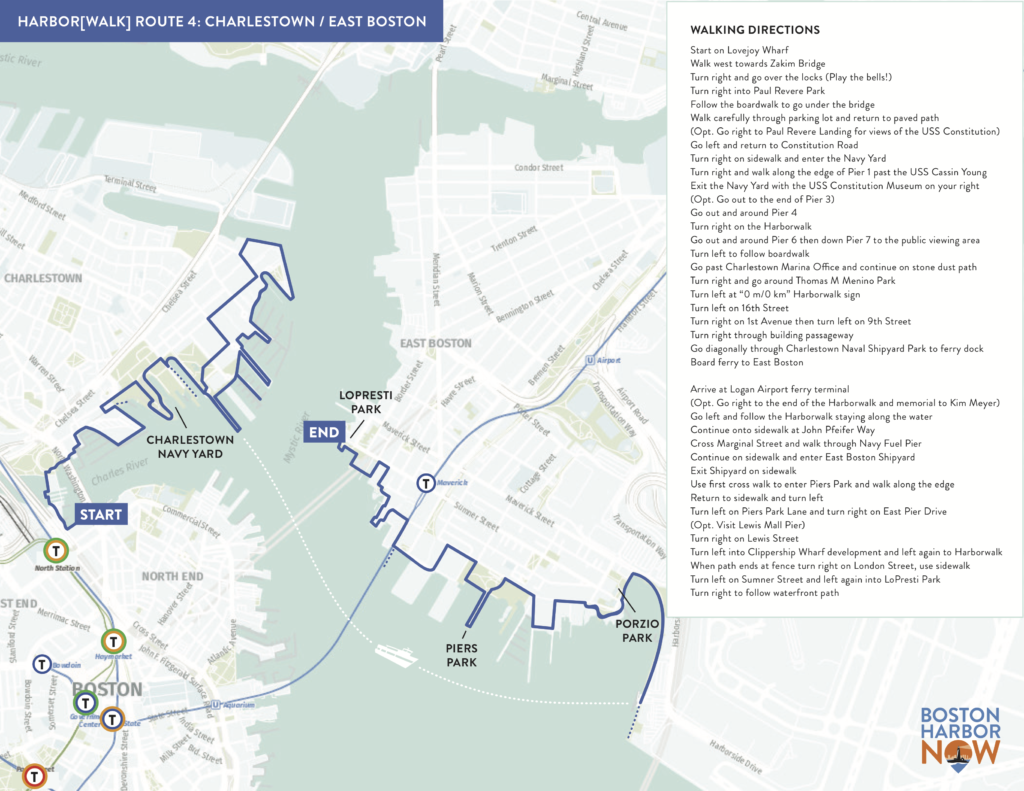 Charlestown and East Boston both have incredible ship-building legacies and the piers to go with them as well as designated port areas that are still active today. Both are surrounded by water on multiple sides giving them distinct neighborhood identities because they’re cut off from the rest of the city. Rather than navigating the parts of the waterfront where there’s still no path, we walked through the most connected parts of both neighborhoods and linked them with a ferry ride. 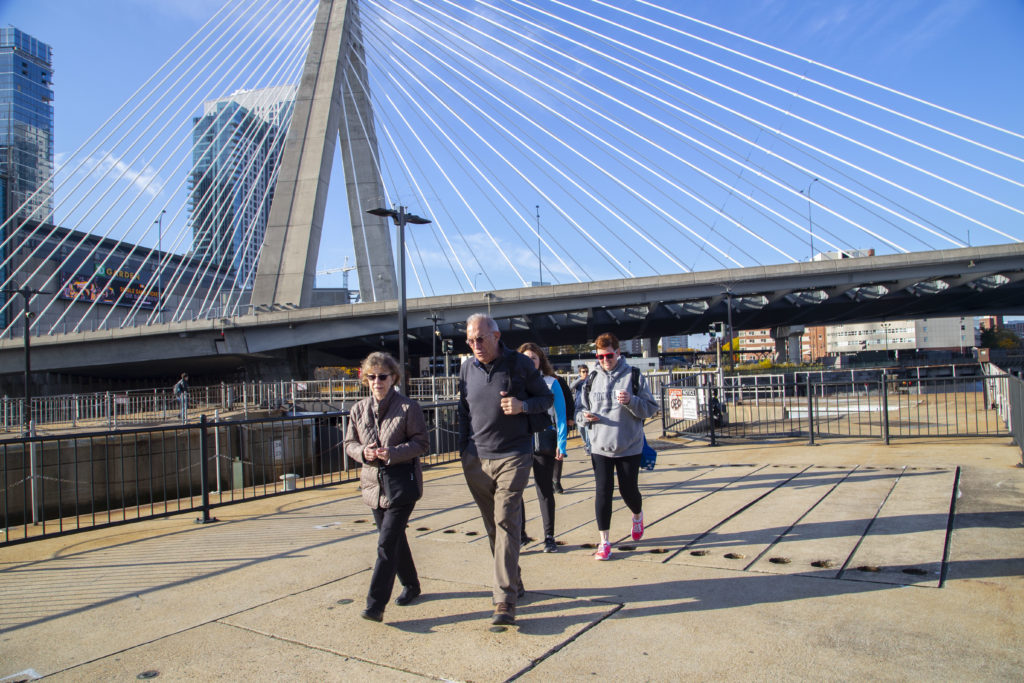 We wanted to enter Charlestown by crossing the locks and ringing the Charlestown Bells, so we began the walk at Lovejoy Wharf with a great view of the Charles River Dam, North Station, the Zakim, and North Washington Street Bridges, and the new ferry dock. It was a perfect confluence of transportation options that Cindy Dwyer of TCC Real Estate described as making it an ideal development location for Related Beal. We set out for Charlestown under bright blue skies with an 11.1’ high tide an hour away.

At the Charlestown Navy Yard, we heard from Ruth Raphael about the National Park Service’s plans to make the yard more welcoming to visitors and neighbors. The Hoosac building, with a faded logo from its early days as a White Star Lines, will become both the entry and security area for USS Constitution access and the home of the USS Constitution Museum. We walked past the nation’s ship of state and the world’s oldest commissioned naval vessel still afloat as well as the USS Cassin Young. 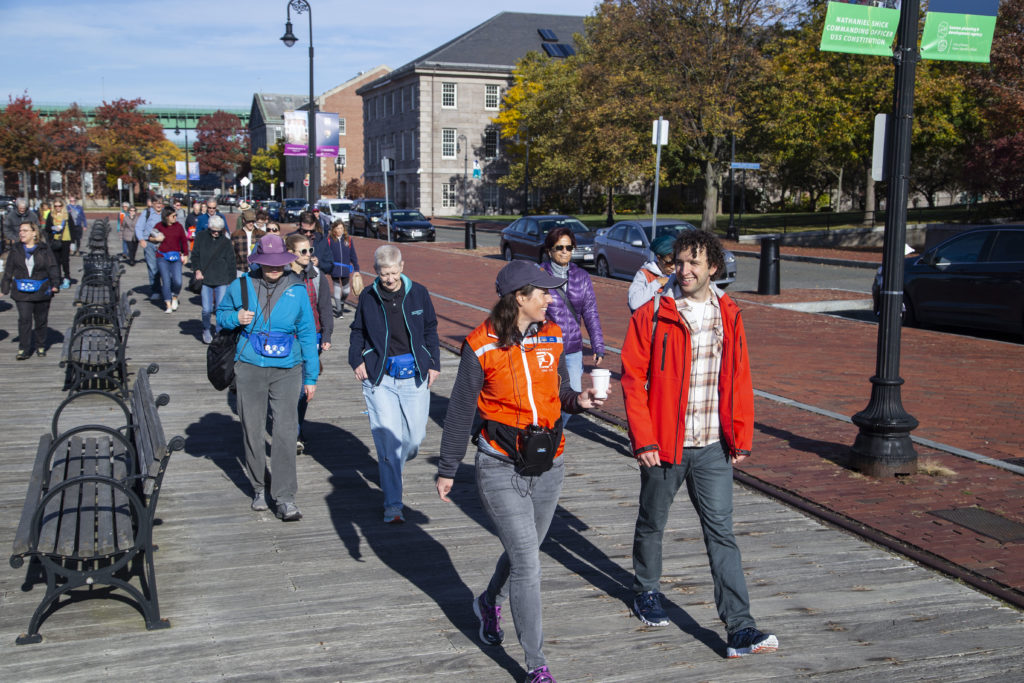 As we continued around Piers 4, 6, and 7, we passed the kind of tiny details that one only notices when circumnavigating the edge of the waterfront. On Pier 4, we found a rock dedicated to Senator Edward Kennedy on his 70th birthday. At Pier 6, we saw the little pink launch boat that ferries people between the Pier 6 restaurant and the Reel House in East Boston. At the very end of Pier 7, we arrived at a small public space that Steve Spinetto, who served on the original Harbor Park Advisory Committee, told us was reclaimed after the city demanded that the unit built out on the very end of the wharf be removed. 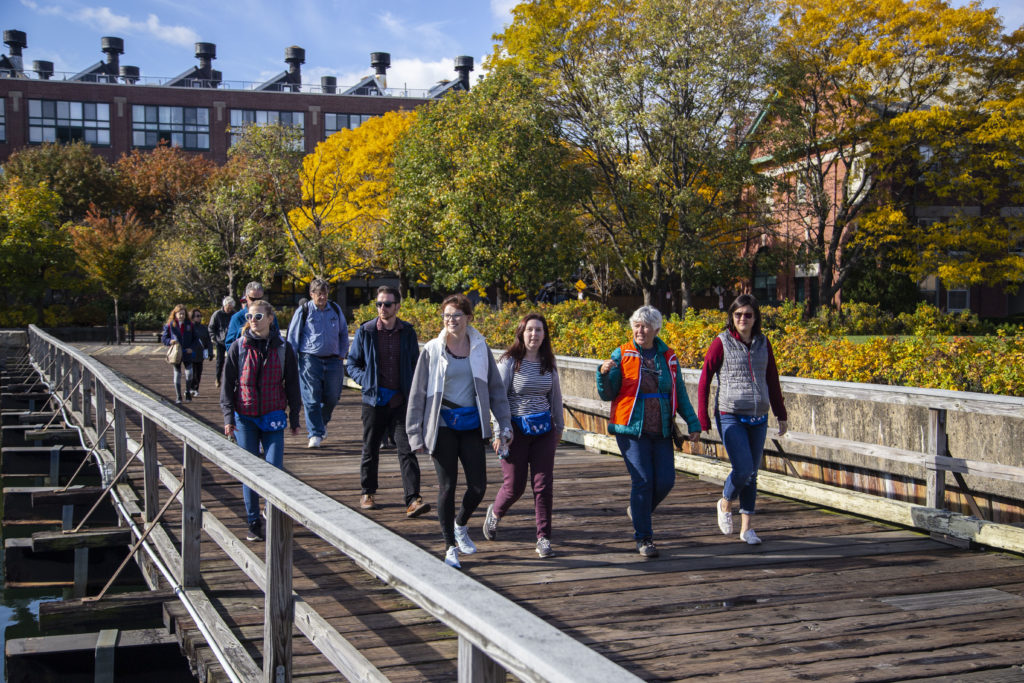 Today, the only new boat launching in Charlestown happens at Boston Boatworks under the Tobin bridge, but historically new ships were launched regularly from the Navy Yard. Just before the Charlestown Marina, we came across submerged weather-beaten boards under the Harborwalk and that were once part of the ramp system for launching new boats. Liz Nelson Weaver, from the Friends of the Boston Harborwalk, told us about this process and pointed out their new interpretive history signs in front of the Harborview Condominiums.

After circling the Spaulding Rehabilitation Hospital, the group returned to Pier 4 for snacks and water stop, then boarded a ferry to East Boston. We docked at the Logan Airport ferry pier, the only complete ADA accessible ferry facility in the neighborhood, and continued our walk along the Massport owned section of the Harborwalk behind their offices and on through the little park at Navy Fuel Pier, the East Boston Shipyard, and into Piers Park. 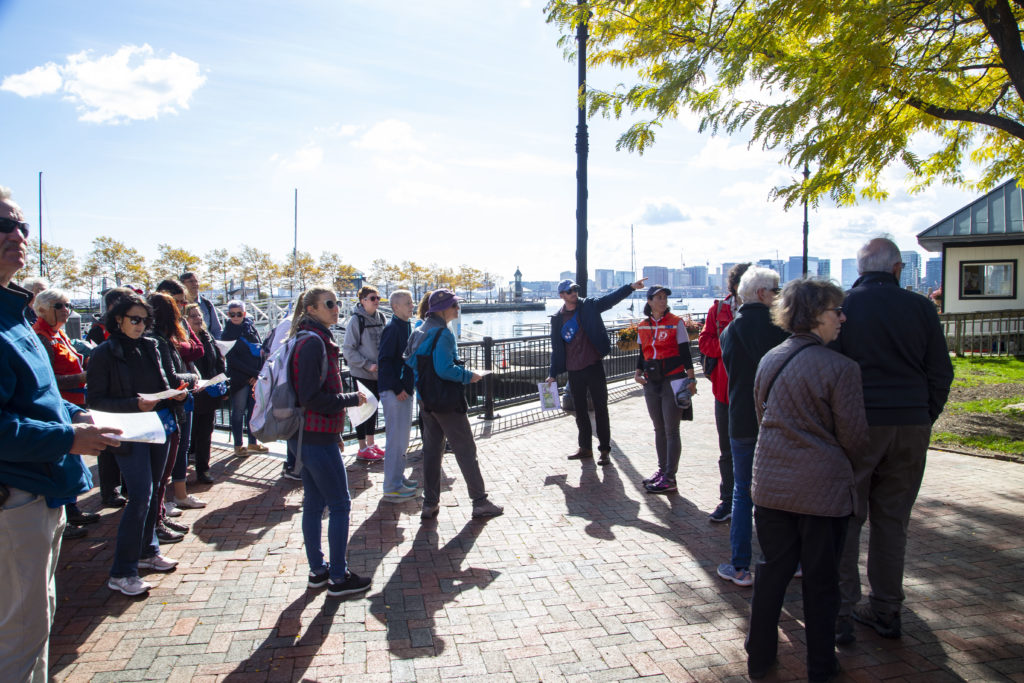 The Piers Park that exists today was built out over 19th-century seawalls and pier infrastructure and completed in 1995 by Pressley Associates Landscape Architects. A new section along the northwest side of the park is currently in design with more active recreational uses included. Alex DeFronzo, the Executive Director of Piers Park Sailing, provided us with history (including a photo of the empty piers before the park was built) and details about the future vision.

Clippership Wharf has one of the newest sections of waterfront on the Harbor and includes a small living shoreline and ramp access to the water. A kayak center is expected here next spring. Nick Iselin and Daphne Sarcia met the walkers to talk about the highlights of the project and the way in which long term resilience was designed into the project. 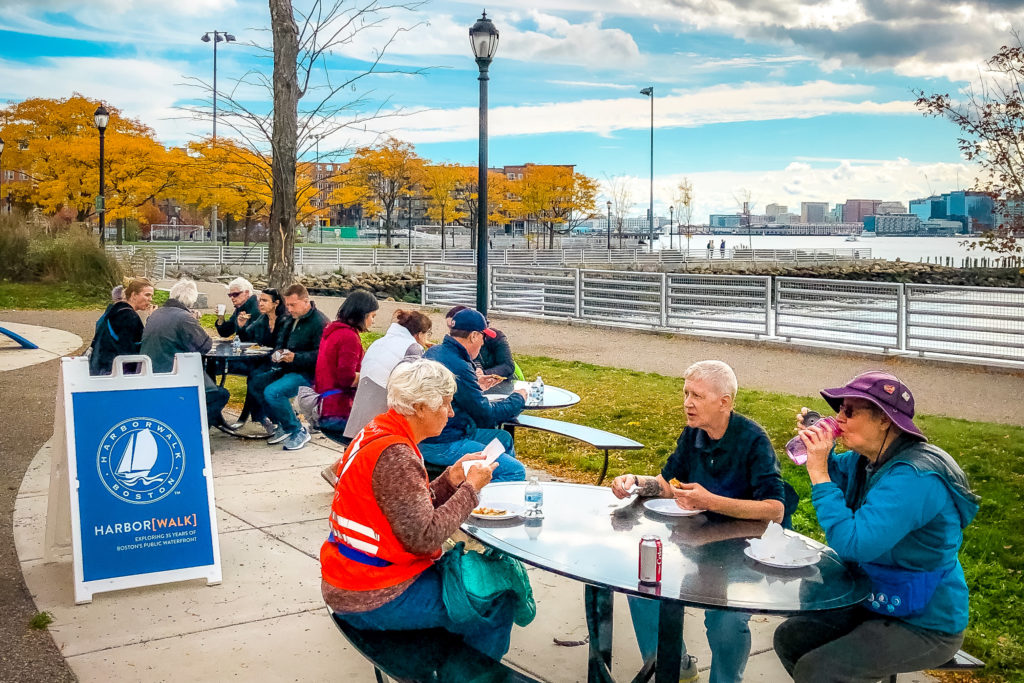 When we reached LoPresti park, the tide had clearly begun to go down, the soccer pitch was full of players, and we enjoyed the picnic table grove where we ate pupusas from La Cancun in Maverick Square.

We encourage you to go out and explore the Harborwalk using this map and those of the other walks. Learn more about the other three walks and the “Harborwalk at 35” panel discussion at bostonharbornow.org/Harborwalk35.