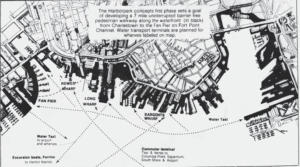 The 1984 Harborpark concept proposed a seven mile waterfront pedestrian walkway from Fan Pier, over the Moakley Bridge, around the Wharf District and North end, across the Charles River Dam, and over to Pier 4 in the Navy Yard. For our third walk, we got to see the extent to which that original vision has been realized as Boston Harbor Now explored the Fort Point Channel and then walked north along the downtown waterfront. Most of this waterfront is now as accessible as this map had envisioned with the exception of the Coast Guard headquarters and a few historic piers. 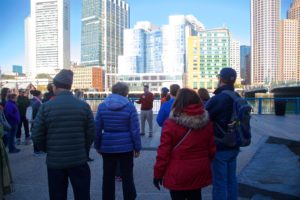 The walk began at Martin’s Park, where a patch of grass over the Silver Line tunnel has been transformed into a dynamic playscape, densely landscaped, and prepared for the predicted flooding along the Fort Point Channel. Chris Cook, Boston’s Chief of Energy, Environment, and Open Space, kicked off the walk by sharing the history of the Richards family and the objectives of the accessible and resilient park, which opened in June. 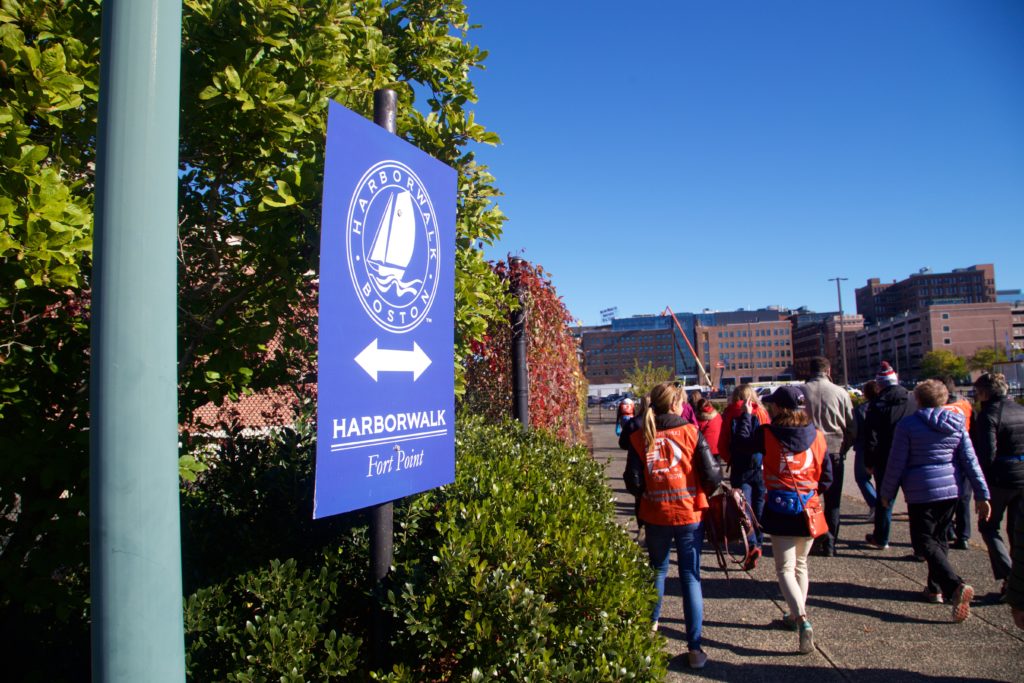 Walking south along the Fort Point Channel, we had to traverse stairs on either side of Summer Street — a reminder that the otherwise flat neighborhood has a complicated topography from the days when some roads were elevated above the rail lines that served the piers. Continuing along, we passed the projects that are underway, including the former GE site, which has new benches and trash cans, and the area being redesigned through the Fort Point District 100 Acres Open Space planning process. We also passed the way-finding bouys of the South Bay Harbor Trail that will eventually connect Ruggles Station with the South Boston waterfront via this section of Harborwalk. 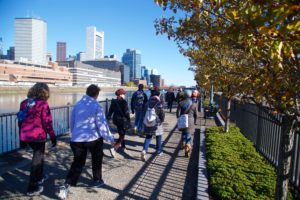 The US Post Office facilities make a long stretch along the western edge of the channel inaccessible to the public, but at Summer Street we crossed over to downtown and continued north. At Independence Wharf, we paused to look at the extensive signage indicating the historic significance of the site, the availability of rooftop access, the number of the Chapter 91 license, and the continuation of the Harborwalk under the building. 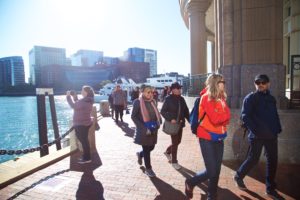 When we discovered that the stairs next to the Northern Avenue Bridge were closed, we walked around 400 Atlantic on the sidewalk to return to the Harborwalk. The small section behind the building was one of the original pieces of the Harborwalk that the City insisted upon in the early days of the process. Lorraine Downey, who chaired the Harborpark committee, recalls seeing people climb over the fence to eat their lunch there and knowing then that the new guidelines were going to eventually create the public space that was envisioned.

At the New England Aquarium, we were met by Taylor Engelsman, who pointed out the buoy marking the intake pipe that brings all the salt water used in the Aquarium up from the Harbor. The 50 year old institution predated the creation of the Harborwalk, but it has evolved with it and created public space all the way around the site. And there’s a grander vision for the future: a “Blueway” that would stretch from Atlantic Avenue out and around the buildings and create path connections down to the water so people could admire the sea life that swims right in the Harbor and not just the animals inside.

Joanne Hayes Rines, the President of the Friends of Christopher Columbus Park met us on Long Wharf to share the recent accomplishments of the group as well as the history. She brought along a postcard with the original 1976 design. Though innovative at the time, and a great place to watch the tall ships that summer, the park gradually fell into disrepair. A major redesign by Halvorsen completed in 2003 and the care of the friends group has created the waterfront park that people love today. Joanne invited everyone to return on November 25th for the annual trellis lighting and on New Year’s Eve to watch the fireworks over the Harbor.

The North End wharves have every possible type of Harborwalk material — wood planking, concrete, stone, brick, gravel, and painted asphalt depending on the property owner and date of redevelopment. We continued around one pier after another until we reached the City parks at the northeast corner of the North End. Cathy Baker Eclipse met us there to talk about the ongoing renovation to Langone and Puopolo Parks where the future facilities will include a stronger sea wall, a floodable Harborwalk, and new elevations within the park to protect the neighborhood from flooding in future storms. We looked in on the construction from beside the Mirabella Pool and down on the construction from Copps Hill terrace.

No walk would be complete without some local food for lunch, and this walk ended with pizza from Regina’s behind Steritti Rink. Next door, the Eliot K-8 Innovation Upper School was having their official ribbon cutting in a building that’s bound to foster another generation of harbor advocates as they look out their classroom windows onto the water.