The Cost of Inaction

On the first day of this historic Nor’easter, we ventured out to notoriously flood-prone waterfront sites in Boston and observed the effects of the storm and the mitigation efforts of property owners. Large and small, public and private, businesses, buildings, and infrastructure vulnerable to flooding were all trying to respond, but it was immediately clear that there wasn’t a coordinated response.

These storms test the resilience of public infrastructure and underscore the need for district- or neighborhood-scale solutions. Ultimately, these are more efficient than the current parcel-by-parcel approach. We must implement strategies to protect entire areas, in coastal communities throughout Massachusetts, and the City of Boston is beginning this process with its resilience planning for Charlestown, East Boston, and South Boston. We also have to do the same for the downtown area, stretching from the Charles River Dam to Fort Point Channel, which was directly impacted by today’s storm. In addition, resilience and green infrastructure should be an integral part of every waterfront project, from small neighborhood parks to district-scale infrastructure.

An independent analysis by the Multihazard Mitigation Council found that every $1 spent on mitigation saves society an average of $6 in the long run. The City of Boston’s Climate Ready East Boston report reaffirms this and makes it clear that climate preparedness conversations needs to focus on the immediate and long term benefits of effective resilient solutions and not the initial cost of implementing resiliency projects. These lessons apply throughout the state. 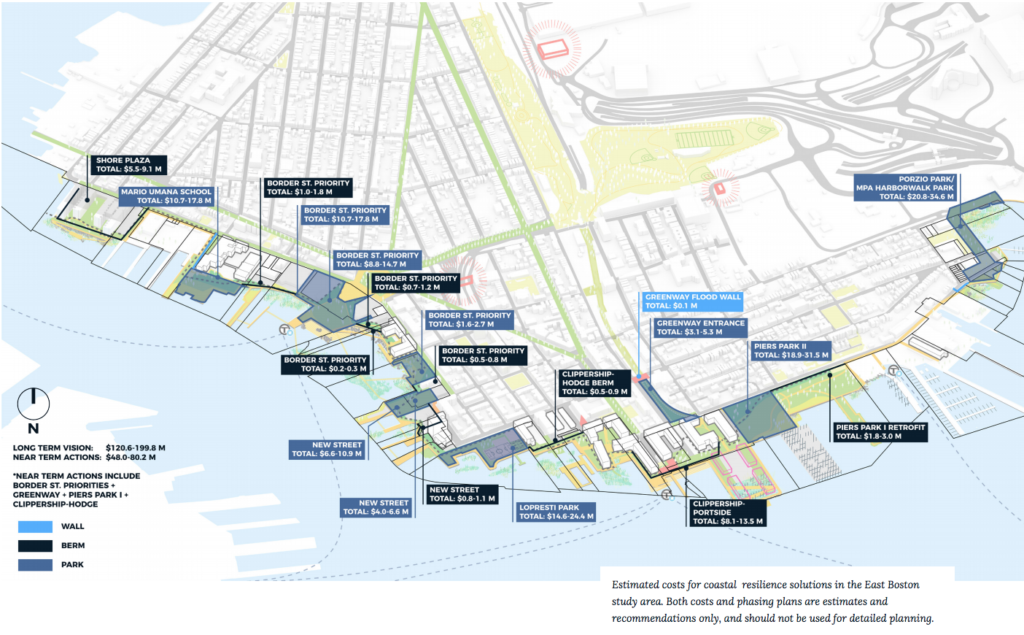 The Coastal Resilience Strategies for East Boston and Charlestown (2017) report outlines the costs and benefits of specific projects.

According to the City of Boston, in East Boston alone, the implementation of near-term resiliency actions would protect more than 10,800 residents, 250+ businesses, and a variety of critical infrastructure and community services. This kind of protection from a single coastal flooding event would prevent an estimated $620 million in flood-related losses. Even if we assume the high end of the proposed project estimates (Greenway entrance $5.4M, Piers Park II$31.5M, Clippership Wharf berm $0.9M, and Border Street waterfront $31.5M for a total of $69.3 million), the cost-vs-benefits ratio is unequivocal. This is the kind of analysis that should dominate conversations about neighborhood-wide resiliency planning. If we fail to fund and implement resilient projects today, the City and its residents will feel the effects of our failure well beyond the initial dollar signs.

After spending decades and billions on the clean up of the harbor, tearing down the Central Artery, and building parks and connections to the waterfront, we need to maximize its benefits for all community members — today and for future generations. To achieve this will require significant investment. It will require overcoming our Big Dig “hangover,” and recommitting to large-scale thinking and investment. The good news is that, thanks to proactive planning by cities and the state, we know what many of the strategies and solutions, and we’re moving in the right direction. The question will be whether we can move fast enough.